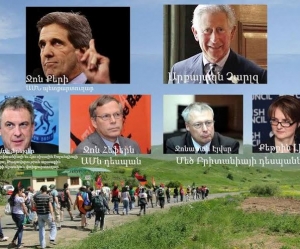 The embassies of a  number of countries that have declared themselves “civilized”, including the United States,  Great Britain, Germany and Canada, together with the World Bank and the European Bank for Reconstruction and Development in cooperation with the Government of Armenia, have come togther to organise a conference in Yerevan titled “Responsible Mining” that is to be held on 25 – 26 March 2014.  I am not even going to consider whether it is appropriate for the aforementioned states and international financial institutions to organize anything using the word “responsible”, but allow me to draw attention to the fact that an American mining company is deforming the village of Meliq near Aparan and aims to expand its operations all the way to Hankavan.  Or to remind everyone that the toxic waste produced as a result of the work of German and Canadian mining companies has poisoned vast areas of the Syunik region, making it dangerous for human habitation.  All of the above projects are financed by international “development” banks and by money held in off shore accounts, so as to keep “developing” countries under the yoke of debt.

And this is just the beginning. Now another civilized nation is attempting to extort its share of our resources. I am referring to the British company, which is seeking to exploit the Amulsar gold mine near Jermuk and the Lake Sevan drainage basin.  This conference, to which they have invited the global mine-eaters, has a sole objective and that is to apply their “professional” knowledge in order to “justify” the exploitation of the Amulsar mine.  They will do this by lecturing us on“international best practice”.

Rumor has it that Armenia’s potential membership of the Customs Union is causing some concern among the “civilized nations”because it may hamper their ability to export the minerals they extract. There is concern that the existing regulations concerning mineral export, includingthe zero (0) drams export levy, might be fundamentally revised. In this case it will be difficult to steal Armenian resourses, so they must come up with a new approach…

Evil tongues tell us that the issue of Amulsar isn’t only about the gold, but that the mine is situated in a strategic location in which to place heavy machinery not too far from the Iranian border. In such a scenario, Armenia becomes “cannon fodder” in far-reaching  “geopolitical” calculations.  Such a scenario seems less far-fetched, when one considers the fact that the Amulsar mine has one of the least amounts of gold in Armenia and that the mine’s economic feasibility report was barely approved. But of course these are all rumours…naturally, we don’t think that way! So, let’s return to the main business at hand.

In October 2013, the Save Teghut Civic Initiative sent anopen letter to John Kerry and Sir Simon Fraser, the US Secretary of State and the UK Permanent Under-Secretary of the Foreign and Commonwealth Office respectively. Our intention in sending the letter was to draw their attention to the behaviour of their ambassadors in Armenia, which clearly contradicts the norms and ethical rules established under the Vienna Convention on Diplomatic Relations.

In particular, we referred to the actions of US Ambassador John Heffern and the joint husband-wife team of British Ambassadors Jonathan Aves and Katherine Leach, on behalf of Lydian International, a private mining company registered in an off-shore zone.  The aforementioned diplomats have continuously and blatantlyexerted pressure upongovernmental bodies in Armenia on behalf of Lydian. Thesecrude interventions constitute an interference into Armenia’s domestic political sphere and demonstrate a lack of respect towards Armenia’s laws.

In that letter to the chairmen of US and UK foreign relations committees of USA and Great Britain, the recipients were informed that the ambassadors of such “civilized nations” are demonstrating a disrespectful attitude towards the legislation of the Republic of Armenia, public opinion in the country, and that they are contributing to intra-community conflict in Armenia. It was unclear to us what lay behind the ambassadors’fanaticalmotivation toprotect the interests of a private company registered in an offshore zone. The participation of American investors’ in any economic program cannot be a sufficient basis forsuch forceful interventions by foreign diplomats. The actions of the aforementioned ambassadors are not in line with their declaredcommitment to the principles and aims of democracy, rule of law, and the struggle against corruption.

The Save Teghut Civic Initiative also raised questions as to whether the ambassadors’ behaviour might possibly be motivated by personal gain and we asked for the immediate launch of an investigation to explore the legality of the ambassadors’ actions and whether this was in accordance with existing diplomatic norms and ethical rules. In response to our letter, we received a rather patronising letter from the British,  which did not address any substansive issues but whose message could be summed as ”whatever our ambassadors do is good”. As for the United States, we have yet to receive a reply.  In sum, neither side provided any counterarguments nor did they respond to our concerns.

After all this, the representatives of former and current empires continue to speak about democracy, debate, and human rights and other “responsible” matters. Meanwhile in practice, their off-shorecompanies are taking this issue upto the international level. In reality, the states that are taking our resources are only prolonging the life of the corrupt authorities in Armenia.  These “civilized nations” themselves are supporting the systematic corruption involving powerholders in Armenia, on whom, it would appear, the “civilized nations”possess much compromising material.

Therefore, on the same day and in parallel to the conference organized by the mining entities and supporters, weare organizing our own alternative conference to provide a platform for other voices and not just the honourable enlighteners from “civilized nations” who have come to educate usignorantfolk on how we can best transfer our resources to them. Of course they are big and powerful, but at all times and particularly today, marginalized groups create human civilization!You may feel free to issue sanctions against us to your heart’s content – go ahead, seize our Swiss bank accounts, deny us entry visas to your coutnries, we’ll somehow survive this loss. And for our part we’ll make your prince flee from the Matenadaran Armenian Museum of Manuscripts.  That is what we can do, not to shabby eh?  But remember this,  Jermuk will NOT become a mine because it is an even worse project than Teghut.  So imagine the resistance you are going to encounter.